Nicole moved to Ridge Manor, FL over 3 years ago from Loganville, Ga. Nicole’s hobbies include art, gardening, and culinary arts. In 2016, she decided to follow her interest in the medical field and she enlisted in the United States Airforce. Due to injury, her term of service ended early and she was unable to pursue her dream in the military. March of 2017, Nicole began working at the Humane society / SPCA of Sumter County and volunteered at other humane societies in her free time. Nicole started as a volunteer at River Ridge Animal Clinic in 2017, and was hired on full-time as a client care specialist and a technician shortly after. Nicole is a proud owner of three cats, Willow, Mister, and Hazel. She has always had a strong love for animals, which shines through in the passions she puts into patient care. Nicole vows to treat your fur babies as if they were her own.

Angela was born and raised in the Tampa area and graduated in 1997 from Land O’ Lakes High School. She has been involved in the agriculture industry and the National FFA for many years. Her love for the industry has spurred her to continue her passion of working with animals. She has raised and shown many species of animals ranging from small companion animals, large livestock species, and recently, reptiles. Angela has provided exceptional patient care in the veterinary industry for over 20 years. She joined our team in September 2017 shortly after moving to Center Hill, FL. In her free time, she happily stays very busy raising her son, barrel racing on the weekends, and taking care of her own zoo at home.

Sandy is a proud central Florida native from Lake County. Sandy participated in 4-H while in school and continued to show cattle in open shows following high school. She has been a veterinary technician and has worked along side Dr. Hooks for over a decade. Sandy became a valued team member at River Ridge Animal Clinic in February of 2018. Sandy’s hobbies include fishing, kayaking, and anything to do with the outdoors. She is happily married with three children. Sandy enjoys sharing her 4-H experience with her children through gardening and teaching them proper animal husbandry and stewardship.

Alisha is a native of Dade City, FL. She has a passion for animals and exceptional patient care. She has 16 years of experience as a veterinary technician. Alisha has been a member of the River Ridge team since it’s opening in June of 2017 and has worked alongside Dr. Hooks since 2007, In her spare time, she enjoys spending time with her family, cooking, and traveling to California.

Lisa is a Pasco High student who has great admiration of her four-legged family members. She has volunteered at River Ridge Animal Clinic since opening in June 2017. Lisa was formally hired as a Veterinary Assistant in August 2018, and she is excited to continue her education in the veterinary field.

Kristina joined our team in May 2018. She is a Florida native, born and raised in Brandon. She relocated with her husband to Dade City in 2017. Kristina obtained her Associate in Science in Veterinary Technology and official certification as a veterinary technician in 2010. She has worked in the veterinary field for 12 years. In her spare time she enjoys being outdoors, horseback riding, fishing and spending time with her husband, family, and pets. She shares her home with two dogs, two cats, two horses, and chickens.

Mariah is a Florida native that joined our team in August 2018. She has been in the veterinary field for 4 years. She is a high school graduate working towards her certification as a veterinary technician. Due to a car accident in December of 2017, Mariah is paralyzed from the waist down. Mariah has incredible determination, and does not let her injury stop her from achieving her personal and career goals. Her never-ending smile and strength of spirit are definitely an asset to our team.

We will do our best to accommodate your busy schedule. Please schedule an appointment today! 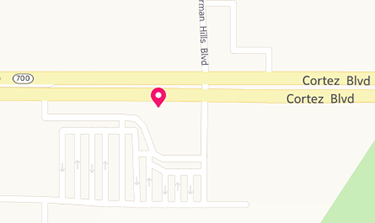